When the events first occurred the photos in all the newspapers showed a sweet innocent young man apparently about 13 years old and a older individual looking somewhat swarthy, dark and even dangerous. It was a few weeks later that we saw pictures of an older Trayvon Martin. Trayvon wasn't 13 he was 17 when the events occurred. He didn't have the innocent look of the 13-year-old. He arguably came across as a dedicated gang banger.

The initial shaping of the events in the media were that a nearly psychotic neighborhood watch vigilante head shot Trayvon in cold blood. Network newscasts of the 911 telephone call were maliciously edited to provide the impression that George Zimmerman was a racist. Although there were many pictures taken from the medical care that George Zimmerman received on the night of the events few were published or publicly available. Support for the statement that his head had been bashed on the sidewalk repeatedly was not made available with photographic evidence. 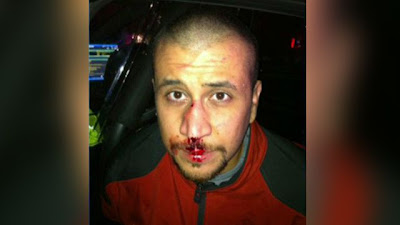 A prosecutor is supposed to seek justice. They aren't supposed to have an agenda. If laws were broken their job is to find the evidence to support that assertion. If laws were not broken it is not their job to promote a racist or divisive policy. Creating an inaccurate or erroneous perception of events would be malfeasance in office and certainly illegal.

Was Trayvon looking for trouble that night? Was Zimmerman acting within his authority as a neighborhood watch representative? Had Zimmerman retreated before the shooting? Did Trayvon act aggressively and violently against Zimmerman? Was the shooting justified?

Those are all good questions but the one that really should be of concern is what the prosecution is trying to do in this case
Posted by Ed Rasimus at 1:38 PM

Why Ed, there you go being silly again. The persecution is trying to win, of course. If by doing so, they can destroy the life of an innocent man, so much the better. If they can win, destroy an innocent man and get promoted well then...isn't life grand!

Great post, Ed. This seems awfully familiar being from the Triangle of NC where several years ago we were forced to watch a rabid prosecutor (in the Duke Lacrosse Rape case) that was more concerned about his career and his media presence and the social impact of the case than the actual truth (or lack thereof) behind it.

The matter is made worse by the fact that the locals declined to prosecute, but the governor giving in to the propaganda pimps and race baiters and appointed a special prosecutor. The local head LEO that declined to push an indictment was pushed out of office. The special prosecutor appointed for the job exercised discretion not to submit it to a grand jury for review, and instead entered an information or accusation (or whatever Florida chooses to call it) on her own volition. It was a case that needed review by a GJ, and under the circumstances of publicity and bias, the prosecutor could balance it by allowing the defense some time to make a short presentation as well (it is rare but is done in discretion of prosecutor). Dershowitz accuses her of lying in her affidavit by withholding information.