The Sunday morning paper used to be something to look forward to, an hour or two with a couple of fresh brewed cups of coffee and a relaxing read about a wide variety of topics and an opportunity for a few fun diversions like a crossword puzzle, some color comics and maybe an enticing restaurant review. This morning, however, the Dallas Daily Worker and Propaganda Sheet was so filled with liberal, left-leaning, human-interest gag-on-your-breakfast, crap that I'm once again on the verge of cancelling.

Nearly every page had some bloviation about a woman raising three children, losing two of her three part time jobs, lacking "affordable health care", recovering from domestic abuse in a a welfare shelter, and not having gifts for "the holiday". So, were there any husbands involved? How about simply fathers? Were these all immaculate conceptions? Why those part-time jobs? Didn't she take advantage of the societal guarantee of a free education? Why did she lose the jobs? Were her drug abuse and bad choices a trigger for the domestic abuse? Why did the paper have to point out the "hunger" which cycles through the family along with the rather unusual comment that such hunger doesn't effect weight? In short, the paper was simply loaded with socialist, welfare-dependency, redistribution propaganda.

Then we got this little item about law enforcement:

The Danger of SWAT Teams

What particularly piqued my attention was the lack of knowledge displayed both by the quoted officials and the crack reporters:

"To throw SWAT uniforms and tactical vests and ballistic helmets on police officers ... and a semiautomatic machine gun in their hands ... and offer them very little training – that does not give you a SWAT team," said Paul Hershey, president of the Texas Tactical Police Officers Association.

This guy is president of the tactical police officers assoc. and he says stuff like "semiautomatic machine gun"??

Or how about this non sequitur:

you have a responsibility to equip them and train them and get them to the numbers where they can do the job as safely as they can," said John Gnagey, NTOA executive director.

So apparently it escapes him that "can do the job as safely as they can" is a circumlocution that says nothing.

Without proper training, "my personal opinion is that some of these so-called SWAT teams put the public at greater risk by going out there and trying to handle something they shouldn't be handling," said Lt. D.L. Hodge, who oversees the Dallas Sheriff's Department tactical team.

Oh boy! Who ya gonna call...Dallas SWAT? Give me the clowns of Ghostbusters.

Looking for some good family entertainment this week? Check this opportunity: 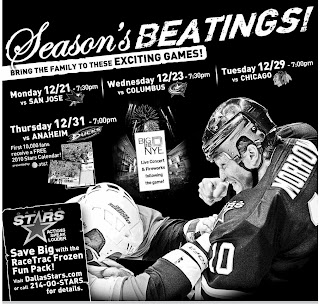 No skates, no sticks, no goals, no ice. It's about an athletic event and teamwork. Yes, that's what I'd want my twelve year old son to aspire to, a bare-knuckled brawl masquerading as sport.
Posted by Ed Rasimus at 9:23 AM

We canceled our subscription to the leftist "Washington Post" last week. The cost/benefit was just not worth it. Rather than doing accurate reporting an real issues (such as the obamacare scam) they continually provide disinformation or out right lies and crap such as you write about in this thread.

It is surprising these rags have not long since crashed and burned.