The Mistakes We Made

Cameras used film in those days and many of the pictures are long gone. This one, however surfaced this morning and captures me in a moment when I was still young and immortal. The bulls were only yearlings and the horns were blunted, but they could still knock a 200 pound fighter pilot on his butt without much effort. 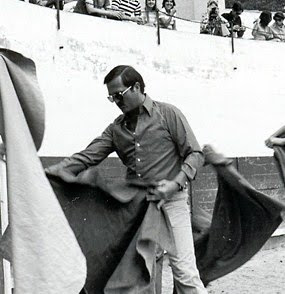 The bad news was that these young bulls did this every weekend against a new crop of budding matadors. They had seen it all before. It was only on my third or fourth go around with another bull later that afternoon that I got up-ended.
Posted by Ed Rasimus at 4:01 PM

Ah, fighter pilots.
What, flying combat not exciting enough?
600 MPH at 100 feet too boring?
Danger close missions just don't give enough of that adrenaline?
God bless you and your brothers and sisters Ed. It warms my heart to know that they're still out there, doing the same kind of stuff.
And good on them all.

Makes me think of Trooper back in the Army doing the int'l rodeo thing. Bull riding, usually, the rest as needed...