I was paging through the new edition of American Rifleman last night when a "Eureka" moment occurred. We had changed the paradigm of American Rifles. The blessed free market had functioned once again and the result was something that the anti-gun forces could not have imagined in their darkest, Tim Burton, nightmare moments.

Back in the Clinton era it was easy for them to fan the fears of the limp-wristed left of the nation by pointing to those evil "assault rifles" which were so menacing that any rational person would quake in fear upon being in the same city with one. They were only meant for one thing, killing people. They were "cop-killer" guns. They were capable of shooting repeatedly! They were the "weapon-of-choice" of gangs, thugs, bank-robbers and people who push ahead of little old ladies in grocery store checkout lines.

They passed a law, you may recall. The assault weapons ban needed to define around "legitimate" hunting weapons--they would get to them later. So, they built a list of naughty features which made a gun too bad for a civilized person to possess. Stuff like collapsible stocks, flash-hiders, large capacity magazines, vertical hand grips, bayonet lugs, etc. If it was black it was bad. 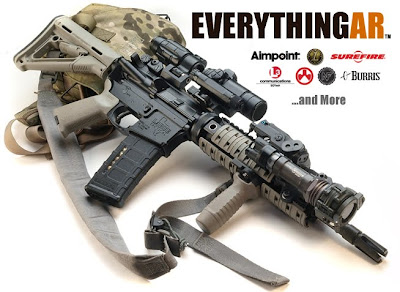 That is indeed a menacing looking weapon. I'd like to have one just like it! Actually the ban did very little but raise the prices on guns. Minor cosmetic modifications made the new versions legal and the sales flourished. Eventually, Clinton was out and George W. Bush was in with a Republican congress and the ban expired.

During the ban and since then, a legion of folks have sought out their very own assault rifle to have, to hold, to shoot, to enjoy. We found that they are lightweight, they are easy to shoot without a lot of recoil, they are accurate, they are durable, they are inexpensive to shoot. The market noticed what the shooters wanted.

Today, if you want an AR-15, you can find them from at least a dozen manufacturers. They all follow the same basic pattern as the military M-16 rifle with the exception that they don't have a full automatic or a burst fire option.

And that's just a sampling. But, the problem is that while these "assault weapons" are fine for shooting targets, plinking at the range, or hunting ground hogs, coyotes and jack rabbits, they aren't legal in most states for hunting larger game. The .223 caliber bullet is too small. Most states require a minimum of .243 or 6mm for deer and larger game.

Which leads us to the new paradigm. The AR-15 model is so popular for so many reasons that we are now seeing it available specifically in "hunter" versions--AR rifles in calibers that are great for North American big game hunting. We've had ARs in .308 (7.62 NATO) for a long time. We've added things like the 6.8mm SPC, the .243 Winchester, the .338 Federal, 7.62x39, .450 Bushmaster and there are more lurking out there.

The options to equip your AR make the old hunting rifle choice of "what kind of scope" look like the amateur hour. Worrying about rings and bases to mount that scope? Not with an AR. A simple mil-spec rail system lets you take any of the menu of optional pieces out of the box and clamp it on the rifle securely and ready to take to the range. Choose a lightweight variable power scope designed for the combat rifle and you've got great optics with the plus of an illuminated reticle that doesn't need batteries. "Light" years ahead of that old scope. Smaller too.

Want a simpler system? Go with a holographic "red dot" sight. A few ounces in weight and it offers a classic illuminated reticle that make a fighter pilot feel right at home. Single plane sighting in a nut shell sized gadget. Combine it with the scope if you want.

Want a light in the dark to get to your spot in the woods? Add a tactical LED flashlight to the rifle--there's plenty of room on the rail system. How about a laser aimpoint? That fits too. You can always go back to basic iron sights if you want.

When you've modded your rifle to fit your personal preferences, you've still got a lightweight, easy-shooting, accurate friend in the field. Sling points at front, middle and back of the rifle make it easy to carry. Collapsible M-4 carbine stock means you can get one for your son or grandson that will fit on his first deer hunt and still be comfortable when he's grown and on his own.

I'll always have a soft spot in my heart for a classic bolt action rifle with finely figured walnut stock, dark blue steel and a fine scope atop. But, the paradigm has changed and the rifle world has moved on. Today, the hunting rifle of choice is becoming the evil assault rifle of the '90s.

That is going to make it a whole lot harder for them to pry them out of our cold dead hands in the future. Their faulty argument that somehow the 2d Amendment is about hunting is going to be useless since the target of their effort is quite clearly a hunting rifle.

At that point, of course, all wise men will remind them that hunting isn't covered by the 2d Amendment. The amendment is about protection from oppressive governments and we know that.
Posted by Ed Rasimus at 9:54 AM